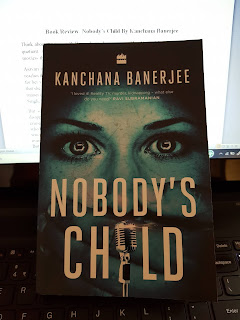 Think about a gripping Bollywood masala movie you like. Now triple the thrill and masala quotient. And Bingo! You have Nobody’s Child. Just one difference from the Bollywood movies- there is an intelligent story in this book. No offense Bollywood.

Asavari is a simple girl amongst the billions whose dream is about to come true when she reaches the grand finale of singing reality contest, Indian Koel. Audience loves her not only for her voice but also for her simplicity. Little does she know that the fame has a hefty cost that she will have to bear. When Asavari meets a deadly accident and is found dead, the first runner up Tanya who is daughter of a powerful politician and businesswoman Kamini Pratap Singh, becomes the Indian Koel winner and bags all the prizes and contracts.

But someone who claims to be Asavari comes back and has a deadly story about her disappearance. From rosy dreams of winning the coveted Indian Koel title to the dungeons of crime, captivity and torture, Asavari has seen enough in a short span. And there are many who have capitalized from her misfortune. Avniel, who wrote a book about Asavari when she was presumed dead; Bhaskar, from IKA TV which aired the Indian Koel; Tanya who claimed everything that belonged to the rightful winner of the title and Kamini who has sinister plans. But now everyone seems to help her and claims to be Asavari’s saviour. Asavari has to look for the one who she can trust again and declare that she is nobody’s child.

The author has done a magnificent job of keeping up the thrill and drama quotient throughout the story. There is really not a single dull moment. There are just enough twists in the plot to keep you intrigued without confusing. There are many characters but each one plays an important part in the plot and hence it doesn’t look crowded. The simple language and smooth narrative gives a seamless reading experience. All in all, a perfect book to pick up on a weekend and finish it before Monday.

Disclaimer: I had received a free copy of this book from WritersMelon in exchange for an honest and unbiased review.
Tweet
Posted by Deepali Adhikary on October 01, 2019