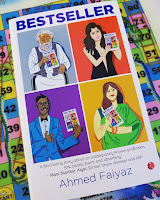 Kalim publishing had seen better days. There were books that had topped the charts and were considered literary gems. Famous people frequently visited the place. But that was long…long ago. When Akshay Mathur, an out of work editor from the UK, comes to work at Kalim publishing, it was a ship sinking head-first. To make matters worse, chief editor of Kalim Publishing, Iqbal Kalim passes away on Akshay’s first day at his new stint. Angus Lee, the owner of Lee Books which was a major stakeholder in Kalim publishing, gives Akshay the enormous task to get at least 5 bestsellers in the next one year from this comatose publication house. With Tarun as the CEO and an ancient dismal staff, Akshay could only see gloom from where he stood.
Tweet
Read more »
Posted by Deepali Adhikary on January 09, 2019 No comments: