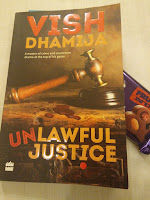 Justice is sometimes an illusion. Law sometimes looks like a spoilt pet of those with money and power. Law is supposed to serve justice based on evidence and logical inferences. But then evidence can be created, manipulated, bought or even eliminated. So how does one expect justice from law which solely relies on suchevidences? And even if justice is served, does it remain lawful? Many such questions or doubts will come to your mind while reading Vish Dhamija’s Unlawful Justice. Actually, after finishing the book. Because, while reading this one, you will be completely absorbed as you turn page after page.

The book starts with a story which sounds like an episode of Savdhaan India. The lawyer couple, Diwans, live in a posh colony in Delhi with their maid Gayatri and her daughter Baby who is almost the same age as Diwan’s daughter Vamini. In an unfortunate turn of events, Baby is molested in Diwan residence by a spoilt son of a notorious businessman. With the right set of connections with the high and mighty, he is almost invincible. He uses all his power to make sure that his son remains unharmed in the whole case.

Just when you think the plot is about the rape of a minor, there happens a murder. The maid, Gayatri is accused of this murder. And this is when the story becomes interesting. Prosecutors face Akash Hingorani in the court who is known for his meticulous defence and a reputation of not having lost a single case. The climax is equally gripping and complements the plot every bit.


I particularly liked the simple writing style. No superfluous descriptions, no heavy vocabulary or unnecessary twists to complicate the story which made it sound very real and plausible. The end is not completely unpredictable but the author has very aptly maintained the suspense through the fast-paced storyline. The plot evokes anger, sympathy, fear and frustration-all at the same time. It does flash memories of some movies made on a similar subject. Nevertheless, you are compelled to read it in one go.

Vish Dhamija is a master of thrillers. With books like Bhendi Bazaar, Nothing Lasts Forever and Doosra to his credit, expectations from Unlawful Justice were high. But Dhamija keeps his promise and offers a thrilling story once again. Certainly a winner for me.

About the Author: Vish Dhamija is a crime fiction author of six bestselling novels. He is best known for his multi-layered plots, believable characterisation and captivating story lines. Vish was born and raised in Ajmer, India. He lived and worked in Jodhpur, Jaipur, New Delhi, Chennai, Jamnagar and Mumbai before moving on to pastures abroad. He has specialisation in Marketing and Strategy from Manchester School of Business, UK. On the release of his first legal thriller Deja Karma, Glimpse magazine called him India’s John Grisham for stimulating the genre of legal fiction in India which was almost non-existent before his arrival on the scene. He currently lives in London with his wife Nidhi. (Source:https://vishdhamija.com)

I received a free copy of this book from Writers Melon in exchange for an honest and unbiased review.