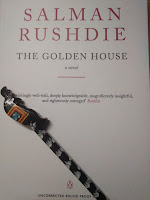 Illusionary identities, twisted unrealistic personalities living in times that are characterized by political drama and cultural upheaval is how one can describe Rushdie’s characters in The Golden House. The inherent inquisitiveness of human beings can lead to unreal, almost weird imaginations. But haven’t you heard, the reality is stranger than fiction. The Golden House by Salman Rushdie is tale of betrayal, secrets and misplaced trust.

Rene` narrates the tale of Nero Golden and his three sons who have relocated to his neighbourhood in the same timeline when America has decided to have a not-so-popular President in the White House. Nero is filthy rich and blatantly obnoxious about it. The three sons, Petya, Apu and D, are equally weird in unique ways. They lead a comfortable life made possible lots of money but are confined to their house and do not like to mingle with the nosy neighbours. However, Rene` hopes to find a story in the lives of these secretive men and takes upon himself to cross the robust iron gates of the Golden House. What follows is a super-complicated tale of betrayal, entangled relationships, and unsettling revelations.

The Golden House is not for everybody. Nor will it hold your attention right from the beginning. It grows on you slowly and gradually. As you try to find some sense in Rene` babbling, the story of the Goldens builds up unhurriedly. The ups and downs are weird but captivating. The writing style is distinctive and is justified for the narrator who is confused and relentlessly suspicious about anything and everything.

You will be disappointed if you try to find a similarity between the previous works of Rushdie such as the Midnight’s Children. The Golden House is different in its own unique and weird way. If the author intended to present a complicated tale, he has succeeded magnificently. However, you do find Salman Rushdie’s typical style once in a while and that is where you will pause and re-read the same lines and devour.

I received a free copy of this book from Flipkart in exchange for an honest and unbiased review.