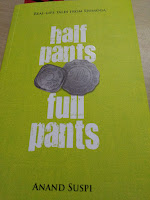 I have not been attracted to a book cover and a title for a long time now. I have learned to be cautious about the promises book covers and titles make. It has happened often that the only good thing about the book was its cover page and sometimes the title. But when I saw this book while browsing the internet, I was instantaneously sure that I am going to read and enjoy this one. And enjoy I did, with every single page I was falling in love with this book even more. The classic 5 paise and 10 paise coins on the cover page beckon you to take a trip down to childhood, one of the best times of your life.

Growing up in the 70s and 80s was simple. And growing up in a small sleepy town like Shimoga was even simpler and devoid of anything overtly exciting. Things like internet, video games, cable TVs that complicate lives today weren’t yet invented in those times or at least weren’t omnipresent. So kids found ways to keep themselves busy. And the parents hadn’t learned the art of “helicopter parenting”, so they left their kids to engage and entertain themselves. And this freedom of living created some wonderful memories. Anand Suspi does a magnificent job of revisiting those memories.

Anand and his elder brother Sriram spent their growing up years in railway quarters of Shimoga. Theirs was a typical middle-class Kannada family with the just the right amount of discipline and pampering. Anand narrates quite a few interesting incidents while he was still in his half pants. And vividly remembers his ordeals as his graduated to full pants. And also the time when he took the town by storm by wearing a 3/4th pant, which was slightly more than a half pant but just a tad bit smaller than a full pant.


Right from the fights he had (he already had fight no. 540 when he was still in his half pants) with his elder brother over minute things (which however, seemed more important than the global warming issue then) to the rebelling against his disciplinarian father, Anand, it seems has written for the entire generation. There will be more than once when you find yourself saying “hey, that happened with me too”.

The chapters are small and keep you completely addicted. The writing is smart and crisp. The narration is intelligent and absolutely flawless. I can’t seem to find any single point to rate is any lesser than 5 stars.

About the Author: An advertising writer for over 20 years, he started with Mudra, Mumbai in 1995 and subsequently spent a large part of his career in Lowe Lintas working under Balki. He was the Creative Head of Lowe Delhi between 2007 and 2010. Currently, he lives in Gurgaon and is the co-founder of an ad agency called AndAnd Brand Partners.

Half Pants Full Pants is his first book, a sort of childhood autobiography set in Shimoga of the 70s and 80s. Given the era and milieu that he grew up in, it carries a flavor similar to that of Malgudi Days. The notable difference would be that every story is real and the characters are all in their mid-40s now, often reminiscing about the gloriousness of their growing up years (Source: TBCBlogTours.com).

I received a free copy of this book from TheBookClub in exchange for an honest and unbiased review.
Tweet
Posted by Deepali Adhikary on June 02, 2017