What happens when a boxer, caught by his demons from the past, cruelly crushes the opponent in a match that ruins more than one life? Why is this girl reluctant to disclose her identity to anybody? And what happens when both of them meet, each one fighting with their demons from the past? Dancing with Demons is the answer to all these questions. And in the most thrilling and gripping way. I totally loved the story and storytelling.


Karan Pratap Singh, a young promising boxer has ambitious plans for Olympics. His coach Jerry has trained him well. However, destiny had some other plans for him and Karan lands himself in a 4-year band from the sport after a match. Sonia wants to keep a low profile and she succeeds till inspector Somnath finds her hiding in Karan’s flat. Both Karan and Sonia have a past that they are not very proud of. The demons from the past have their hooks deep into their present and future. Finally, they decide to face those demons once and for all.

There is something very passionate about stories built around sports. Dancing with demons is no different. Passion and exhilaration form the core of this story. You can actually feel the pain, the enthusiasm and the conflict of the characters. The twists in the plot keep you hooked to it all through the book. The climax though slightly predictable, thankfully, does not disappoint. The writing is crisp and engaging. The transition from one chapter to another is smooth and does not leave any gap for suppositions.

The cover says “soon to be made into a Bollywood movie” and like all bookworms, I am frantically hoping that the movie should be as good as the book. Only a few movies do justice to the original books. Nidhie Sharma has certainly set the bar pretty high. 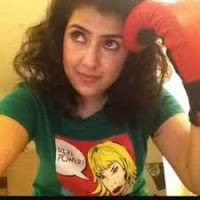 About the Author- Nidhie Sharma is a Writer-Director living in Mumbai, India.
She has studied filmmaking and Screenwriting from New York University and has previously graduated with honors in English Literature.
Sharma was raised in a liberal Armed forces environment and has extensively travelled across the world. An adventure sports enthusiast, she is passionate about telling human stories set within the action genre. Her deep love for music and her connection with the audio-visual medium finds its way into her writing. She is a witty orator and enjoys public speaking.
Having directed documentaries and travelogues for the American and European markets, and worked on American indies in Los Angeles, Sharma is directing a mainstream Indian film soon. (Source: Goodreads)

I recieved a copy of the book from TheBookClub for an honest and unbiased review.

-And I write this post for Day #2 of #HalfMarathon Blogging Challenge with Blogchatter.
Tweet
Posted by Deepali Adhikary on July 17, 2016